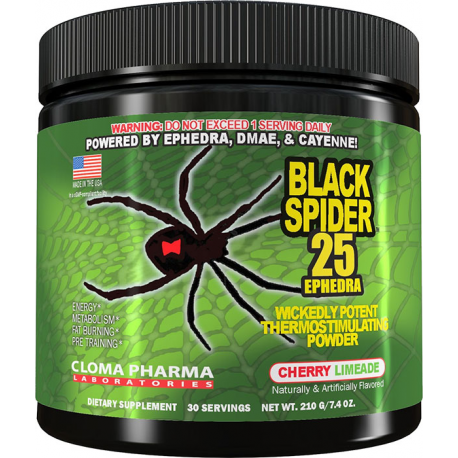 The set of ingredients ClomaPharma Black Spider 25 in the consistency of powder is designed to mobilize the body for faster weight loss as well as increase the level of energy making it easier to train.

Black Spider by CLOMA PHARMA is the strongest fat-burner among all their products. According to the manufacturer, "If Black Spider doesn't help, then nothing will." By virtue of a great number of components with a proven effect, it is a very reasonable statement.

The supplement contains many components in the form of herbal extracts which are characterised by healthy properties and high vitamin content. A safe mixture allows you to transform your body and improve your overall health - all this for a better life quality.

The proprietary ECA stack (ephedrine/caffeine/aspirin):
A mixture created according to old, well-established rules. Ephedrine, together with caffeine and aspirin, ensures fantastic results when it comes to fat tissue loss. However, for that to happen, there need to be the right proportions between the components. Black Spider was designed so that it fulfils those conditions and that is why the components work synergistically, boosting one another's effects on the human organism.

Natural, pure ephedrine is not used because of its negative properties, so a safe substitute is used in the supplement - Ephedra viridis powder. The extract has a big influence on the central nervous system and boosts metabolism.

Pure aspirin is also not used in the product's composition. A white willow extract was used instead. It contains many salicylic glycosides whose effect is the same as natural aspirin's. Thanks to that, many harmful properties of the product were eliminated without decreasing its efficiency.

A thermogenesis-stimulating composition of Black Spider:

Citrus Aurantium is a source of flavonoids, monoterpenes, glycosides and synephrine. Synephrine stimulates adrenaline receptors in fat tissue, which results in simultaneous lipolysis and thermogenesis activation.

Guarana Extract is a rich source of caffeine, theobromine and antioxidants. It exhibits stimulating, antimicrobial and antioxidant properties. Theobromine reduces arterial blood pressure, has a stimulating effect and increases the speed of basic metabolism, which causes increased energy expenditure in the organism, thus increasing the loss of fat tissue. Thanks to its ability to expand vessels, an improvement of blood supply and nourishment in the organism's tissues can be observed.

Yerba Mate contains caffeine and other substances that stimulate the brain, the heart and the muscle tissue in blood vessels and other body parts. It is used in treating mental and physical fatigue, as well as the chronic fatigue syndrome.

Yohimbe Extract (8% yohimbine) is used for the purpose of reducing fat tissue thanks to its lipolytic properties. It blocks α2-adrenergic receptors, thanks to which its becomes possible to obtain more energy with free fatty acids gathered in a cell and that, in turn, accelerates weight loss. Its special property is removing fat from the most resistant places, such as the belly, thighs or buttocks. It is also worth noting that yohimbine intensifies sexual experience and performance and boosts libido.

Cayenne Pepper is one of the best natural agents used for weight loss. It is proven that taking it reduces appetite and boosts metabolism even by 25%, thus contributing to burning calories faster. The substance responsible for that is capsaicin - pepper's main active component. An additional advantage is its positive effect on overall health, while other benefits are: better blood flow, increased sex drive, ulcer reduction, better digestion and its ability to maintain the right blood pressure.

Green and Black Tea Extracts are rich sources of strong antioxidants called polyphenols. Green tea contains a large amount of epigallocatechin gallate (EGCG) whose antioxidant properties are as much as 100 times stronger than vitamin C's. Combined with other components in the supplement, the extracts contribute to burning fat tissue.

Panax Ginseng has been used in medical treatment as the panacea and a key to longevity for thousands of years. Thanks to many active compounds (triterpene saponins, panaxans and ginsenanams, sterols, polypeptides, amino acids, fatty acids and their glycerides and mineral compounds), it has a wide range of uses. To its main properties belong the following: it eliminates excessive excitement caused by stimulants, increases physical capacity, supports the immune system and contributes to maintaining a good health of the organism.

Ginger Root is a source of biologically active compounds called gingerols. Those substances exhibit antioxidant properties, have an anti-inflammatory and warming effect, regulate the functioning of the digestive tract and are beneficial for the cardiovascular system.

Bladderwrack, also known as black tang, is a seaweed which has been used in medicine for centuries. Its main function is stimulating the thyroid gland in overweight and obesity treatment. A high iodine content stimulates the thyroid function which significantly boosts metabolism.

Cocoa Extract has a positive effect on the organism during times of stress and low mood. It is a rich source of magnesium, potassium and antioxidants. The extract's active component - theobromine - reduces arterial blood pressure and stimulates the body. It also activates thermogenesis which causes increased energy expenditure in the organism, thus increasing the loss of fat tissue. Thanks to its ability to expand vessels, an improvement of blood supply and nourishment in the organism's tissues can be observed.

Evodia Rutaecarpa is characterised by the same effect as capsaicin. It is a vanilloid receptor agonist, which contributes to the increased production of heat in the organism, leading to the use of fat for energetic purposes. Evodiamine - the main active component of the fruit, it contributes to the activation of cAMP which accelerates ATP production and protein synthesis, as well as boosts the energetic metabolism of fats and carbohydrates.

The activity of vitamins B6 and B12 is very versatile. Both vitamins participate in metabolising proteins, fat and carbohydratesand in the process of producing red blood cells. Pyridoxine improves the body's immunity, is responsible for the normal functioning of the nervous system and the production of many enzymes. Cobalamin is responsible for mental health and stress resistance; it also participates in serotonin synthesis.

Chromium is a component of many important enzymes, affects regulating the level of glucose in the blood, reduces the insulin need and participates in protein synthesis. The element is also responsible for the normal functioning of CNS, reduces the level of total and bad (LDL) cholesterol and increases the amount of good cholesterol (HDL).

With Black Spider losing fat tissue turns out to be a piece of cake. The supplement's effect is similar to the first ECA stack's functions and gives the user a guarantee of fast loss of body mass. It is recommended for everyone who is tired of inefficient agent which only promise great results and for those who are eager to achieve their dream body quickly. The agent contains a wide range of components whose purpose is not only weight loss, but also an energy boost which makes training easier and more effective.