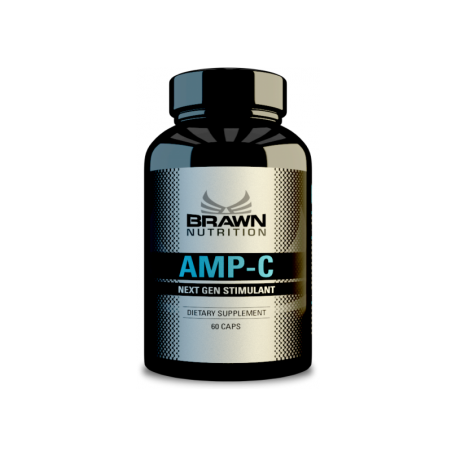 BRAWN AMP-C is a product aimed at achieving maximum stimulation. The use of a new very strong ingredient such as AMP Citrate in combination with caffeine makes it a worthy successor to the disappearing DMAA (geranium) from the market.

The BRAWN AMP-C consists of:

AMP - often found in the form of citrate. It is a 1,3-dimethylamylamine analog (DMAA) and in practice exhibits similar activity to it. DMBA is a relatively new compound on the supplementation market, so its mechanisms of action and safety of use have not been sufficiently well understood. Probably, by affecting the release of appropriate neurotransmitters, it is able to stimulate the body, increase concentration, focus and cognitive processes. It also helps to burn excess fat.

Anhydrous caffeine - otherwise 1,3,7-trimethylxanthine, a purine alkaloid of vegetable origin, whose common name depends on its source. As a selective antagonist of A1 and A2A adenosine receptors, it increases the secretion of catecholamines, including acetylcholamine, noradrenaline and dopamine. In addition, by inhibiting phosphodiesterase (PDE) activity, it increases the concentration of cyclic AMP (cAMP). The increased activity of neurons in this way stimulates the body to work, improves concentration and cognitive processes. Accompanied by the effect of caffeine, the increased breakdown of glycogen and adipose tissue, results in increased availability of substances necessary to produce energy.